Important: Please sign up for the INSIDE THE VAULT CLUB before ordering any back issues. You must be a subscriber in order to gain access. To order back issues, check the boxes by the desired editions at the bottom of this page. We will email them to you ASAP after checkout. Also, please note that the IVC keyholder 15% discount does not apply to IVC back issues.

Live At De Boerderij DVD-R-If you missed this the first time, we're now offering a no-frills version of the inaugural IVC release on DVD-R! CHECK OUT THE TRAILER.

Septennial: Return to RoSfest DVD-R-If you missed this the first time, we're now offering a no-frills version of the sophomore IVC release on DVD-R! CHECK OUT THE TRAILER.

IVC #1-To Catch A Predator (Live 2008)-This 10-minute epic instrumental track was the very first music D97 ever wrote and performed. HEAR A SAMPLE

IVC #3- I Can't Take You WIth Me (2009, Extended Version)-A rough mix of this track which includes additional material that was edited out for the album release.

IVC #4- The Thief (Live 2012)-Audio and Video downloads of a particularly fiery and legnthy live version of The Thief.

IVC #5- The Perfect Young Man (Live with John Wetton 2013)-Mixed from the multitracks, this is the best document we have of our legendary friend John Wetton singing this song.

IVC #6-Forest Fire (Live 2017)-This is a brand new, and thus far unreleased, D97 song. There’s also bonus video and audio featuring this song performed live along with part of Mindscan and Termites. HEAR A SAMPLE

IVC #7- On Paper (Jim Solo Demo 2013)-Hear the origins of On Paper before Jim brought it to D97 in this very intimate demo.

IVC #8-In The Dead Of Night (Live 2017)-Our rarely-performed cover of the UK classic. HEAR A SAMPLE

IVC #9-Sea I Provide (Live 2009)-An unreleased D97 song that we recently resurrected in our live set thanks to the IVC!

IVC #10-New Song Rehearsal Demo (2017, instrumental)-A work in progress that Andrew brought in, and a glimpse at the makings of a future track.

IVC # 12- Who Cares? (Rough Mix 2012) This version features additional harmonies and a totally different sound from what made it on Trouble With Machines.

IVC # 13-Shapeshifter (live Audio and Video 2017) Check out a brand new song which was the first the new D97 lineup wrote and performed together.

IVC #15-Learn From Danny (Live)-A 2014 live version of this deep cut, mixed from the multi-tracks. HEAR A SAMPLE (available soon)

IVC #16-Heat of the Moment (Live) & Battle Lines (2 Reheasal Demos)-We marked the first anniversary of John's passing by releasing these two rarities: Heat of the Moment, which we only played live once at our Tribute Show to John, and Battle Lines, which we learned at his request for Cruise to the Edge 2017 and never performed live.

IVC #17-A Lottery (Live) Audio & Video-Check out an early version of A Lottery live from 2014, including audio, pro-shot video, and full-length steady cam footage of both Jim and Jonathan

IVC #18-Ghost Girl (Rehearsal Demo)-Here's a work in progress, an epic track slated for our next allbum!

IVC #20-Snow Country (Live 2013)-Here's an early soundboard recording of Snow Country live, complete with a keyboard solo section that was excised from the final version.

IVC #21-Trigger (Rough Mix)-Be the first to hear a BRAND NEW SONG that we're currently working on for our new album!

IVC #24-Red (Live 2017)-We launched into this menacing Crimson track with a abandon in honor of our friend John. Special guest Rob Clearfield on guitar!

IVC #25-The Lost Epic-Here's a 10-minute instrumental rehearsal take of an epic we later scrapped, but parts of which ended up in A Lottery.

IVC #26-Death By Two Thousand Cuts-Here are two versions of Death By A Thousand Cuts, one live aboard Cruise To The Edge 2017, and the other from a Tampa show shortly thereafter. Both feature audio and video!

IVC #27-The Man Who Knows Your Name-Check out this very early version from 2007 with Jonathan on vocals!

IVC #30-Back and Forth (2010 Demo and 2011 Rough Mix)-Here are two versions of Back and Forth from very different stages in their development. The demo includes a section that was cut and devloped into The Actual Color.

IVC #31-Tim New Song (Rehearsal Demo & Solo Bass Demo)-Here are two versions of a brand0new song from Tim. one is with the D97 guys (instrumental), and another is the overdubbed bass demo Tim put together for us all to hear.

IVC #32-Blueprint (Live in Montreal 5-16-19)-Here's very nice audio AND video from our set at Petit Campus in Montreal on the Pre-Screening Tour.

IVC #33-Out On The Tiles (Live in Belgium 5-16-13)-Here's audio and video of us tearning through a Led Zeppelin deep cut on our first Euro tour!

IVC #34-On Paper (Live in Louisville 9-2-14)-Here's audio and video of On Paper, shortly before we hit the studio to record it.

IVC #36-Bread & Yarn (demo and rough mix)-Two versions of Bread & Yarn: one is a solo demo from Jim, and the other is a rough mix of the full-length version

IVC #37-Forest Fire Test Mixes-Here are two drastically different mixes of FF that bring out totally different elements of the song to the final version.

IVC #38-Trigger (Live 10-10-19)/Leggo My Ego!!! (demo) Here's audio and video of a live version of Trigger at Trading Boundaries in the UK, as well as a demo of a "missing link" between Trigger and its predecessor, The Unreality Star. 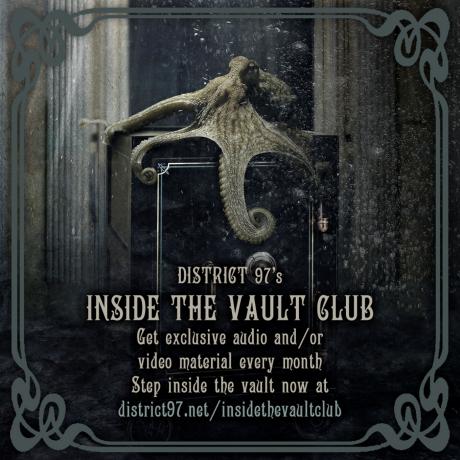