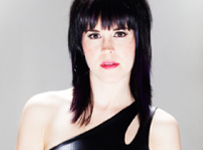 Leslie Hunt began her life in the Chicago area, playing piano and singing at the age of four. Through the years, she has performed on many stages in many roles, and has been celebrated all throughout her development as a performer. At the tender age of 19, Leslie was offered a development deal by Sony Records, and taken under the wing of Survivor’s Jim Peterik. The successes continued in a big way when Leslie beat out over 100,000 fellow contestants to secure a spot in American Idol’s Top Ten Female Finalists in 2007, where she repeatedly performed for millions on live TV, earning fans worldwide. Not one to rest on her laurels, Leslie's new record Your Hair Is On Fire, was released under her own label (Ellenel Records) in 2009, and featured the legendary talents of drummer Vinnie Colaiuta (Frank Zappa, Joni Mitchell, Sting) and bassist Vail Johnson (Stevie Nicks, Herbie Hancock). Leslie enjoys running the gamut from subtle to blistering in District 97, and is happy to have such an outlet to showcase her considerable vocal abilities.