One of America's finest progressive rock bands, Chicago's District 97, headline this killer show in Allen Park. They'll be playing music from their soon to be released 4th studio album and favorites from their first 3 CDs. This is a rare, and not to be missed appearance in the Detroit area by this great band fronted by American Idol top 10 female finalist Leslie Hunt.

Major Dudes, Michigan's #1 Steely Dan tribute, will be performing the entire Aja album. Perhaps not comfortably fitting in the progressive rock genre, but is it really that much of a stretch? We think not.

Waldon Reed, Jr., Major Dudes guitarist, has 8 CDs under his belt, four of which are of the progressive jazz/rock variety. His set will include select tracks from his critically acclaimed catalog and a few surprises.

Come hungry because pizza will be served at 7 from Major Tomato, voted one of Michigan's top 27 pizzerias by the Detroit Free Press.

Tickets are only $15 in advance, and $18 the day of at the door. Purchase link will be available soon. 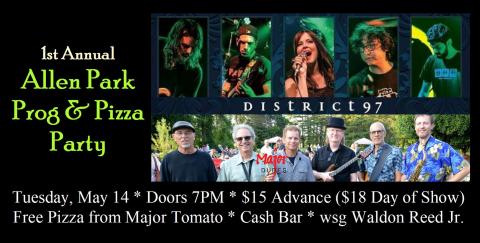